The two Ministers of Education stressed the commitment to enable the new ABC-book to be in use for students of both countries from the school year 2022/23 to honor the 110th anniversary of Independence.

Ministers Nagavci and Kushi thanked the working group of both ministries for the work they have done in finalizing the signed Agreement, while pledging that the whole process for the new ABC-book will be transparent and equal.

Minister Nagavci expressed her special satisfaction for the formalization of the Agreement for the use of a common ABC-book for all Albanian children, which will be of high quality.

Nagavci also stressed that, during her visit to Albania in June, they discussed the obligations they have as educational institutions in order to be in step with the demands of the citizens of both countries..

Among other things, Minister Nagavci said that as Ministers of Education, they are committed to have increased cooperation in other joint cultural and sports activities..

Whereas, the Minister of Education and Sports of Albania, Evis Kushi said that, she did not think that her official visit to Prishtina would coincide with such an exciting and so proud moment, such as the signing of the Agreement for the unique Common ABC-book for both our countries.

Kushi on this occasion said that, we are in a new social, cultural context, we have a new Curriculum based on competencies, development of teaching methods and development of technology and digital revolution, which are arguments that lead us to the design of a unique new Common ABC-book, better than the existing ABC-books.

Minister Kushi also spoke about the Joint Agreement signed in Elbasan for the facilitation of procedures and shortening of deadlines for recognition of diplomas, qualifications and scientific degrees of scholars from both countries, as well as for the promotion of the book on Albanian language and culture for the diaspora.

Kosova and Albania since 2012 have had a common ABC-book, which is still in use in the education system of Kosova.

Today, Ministers Nagavci and Kushi will also participate in the concert of music schools from Kosova and Albania, which is held in the Concert Hall of the high school of music “Prenk Jakova” in Gjakova. 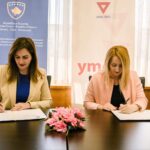